Present What You Imply on Social Media: Say It With Emojis

Love them or hate them, emojis have infiltrated our digital world. They’ve become such a common part of online communication that Oxford Dictionaries selected the “tears of joy” emoji ? as its Word of the Year for 2015. That same year, the Emogi Research team found that 92 percent of people online use emojis. Just how popular are they? In 2017, Facebook reported that an average of five billion emojis are used on Messenger every day.

Although research also shows that people and brands use emojis differently, the bottom line is that emojis are more than a passing fad. If you’re not using them in your social media posts, there are some compelling reasons to start. If you already use emojis in your digital marketing, we have some tips to help you avoid common pitfalls.

Much like images, emojis attract attention. On Facebook, using emojis results in 57 percent more likes, 33% more comments, and 33 percent more shares. That’s good news for companies that want to increase engagement on social media. Emojis are also searchable, which can also boost engagement by making you easier to find online.

The next time you post on Facebook, think about the message and feeling you want to convey, and add an emoji to help you communicate it. Monitor which posts perform best, and build on that to boost your engagement even further.

Once you know what your followers like, you can develop more creative campaigns, like the ones described in this short video by Likeable Media.

Top tip: Use them at the right time

Emojis are best suited to upbeat or positive posts. Even though emojis are widely used, they still carry a hint of novelty, which isn’t a good fit for serious topics.

Reason #2: Bring a human touch to your posts

Emojis resonate with people because they give feeling to our words. And as we described in our post about how to be social on social media, the key to success on social media is behaving like an authentic human. Use emojis to add a personal touch to your posts and replies. Not sure where to start? Facebook compiled this list of top emojis for World Emoji Day in 2017. 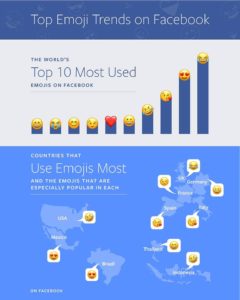 Emojis can also help minimize the risk of misunderstandings because many of them are a substitute for facial expressions. This visual cue can make a huge difference in a short text-based message.

Try incorporating emojis in your Instagram comments and hashtags to show excitement and happiness. Also, incorporate them into replies as a way to show your human response to what you’re seeing.

Like all social media activity, our interactions need to be genuine, or they lose meaning. Don’t overdo it. Use emojis in your posts when it makes sense, and choose them carefully.

On platforms like Twitter, where every character counts, emojis can help you say more with less. A single well-chosen emoji can help convey feelings and save valuable space. This also matters when it comes to storytelling on social media, where short and sweet is best.

Use emojis in your social media posts to set the tone, and use the remaining text to say something with more substance. Once you get the hang of that, look for emojis that can help you communicate your company’s message. There are plenty to choose from — as of June 2018, there are 2,823 emojis available to use, including 157 new ones that were added in 2018.

Top tip: Know what they mean

Not all everyone interprets emojis the same way, so don’t try to be too clever. For example, the upsidedown face—which was designed to convey silliness or goofiness—is sometimes interpreted as sarcasm, passive aggression, or frustration. And in some parts of the world, the eggplant emoji has nothing to do with vegetables. Stick with emojis that are universally understood to avoid saying something you don’t mean.

Ready to start using emojis? On most iOS and Android mobile devices, emojis are already enabled on your keyboard.

From your iOS desktop, place your cursor where you want to type, and click Command + Control + Spacebar (or Command + Option + T if you use OS X 10.7 or 10.8) and a pop-up window will appear where you can pick your emoji. To access them on Windows 8 or later,  open the touch keyboard from either the taskbar or the tools menu.

Do you use emojis in your social media posts? Tell us about your experience in the comments below!

41 Tips To Overcome Writer's Block According To Science (2021)

How to Create a Social Media Strategy for Employee Retention: Tips and Tools

Everything you need to know about LinkedIn video